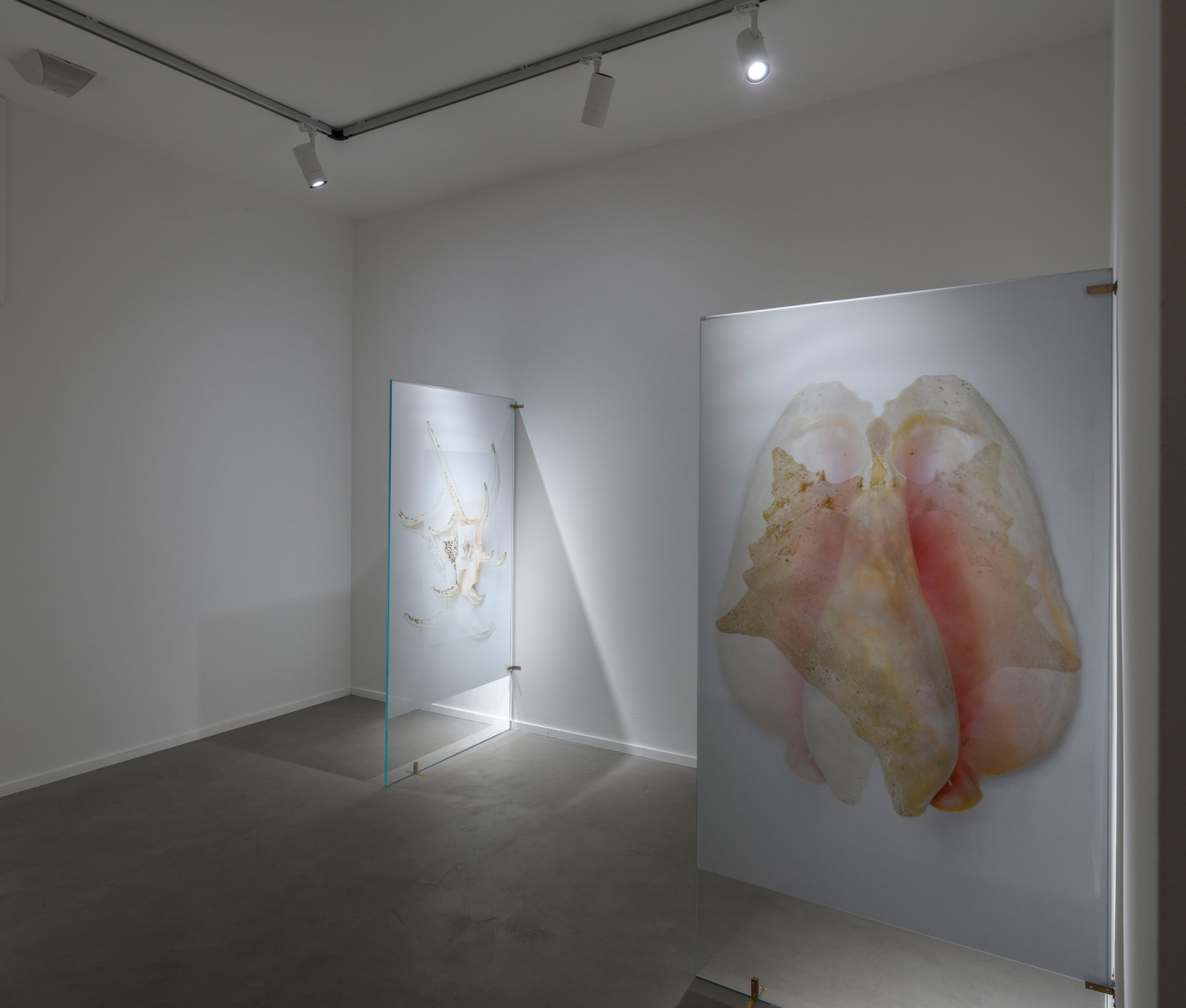 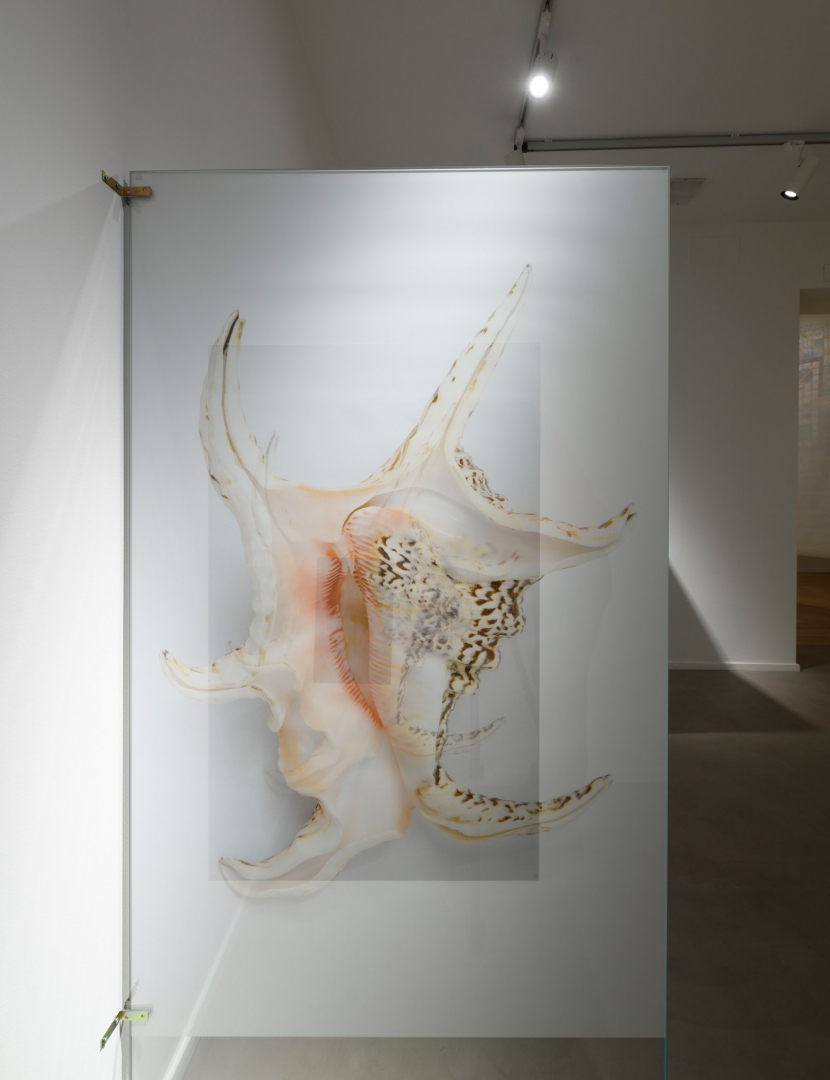 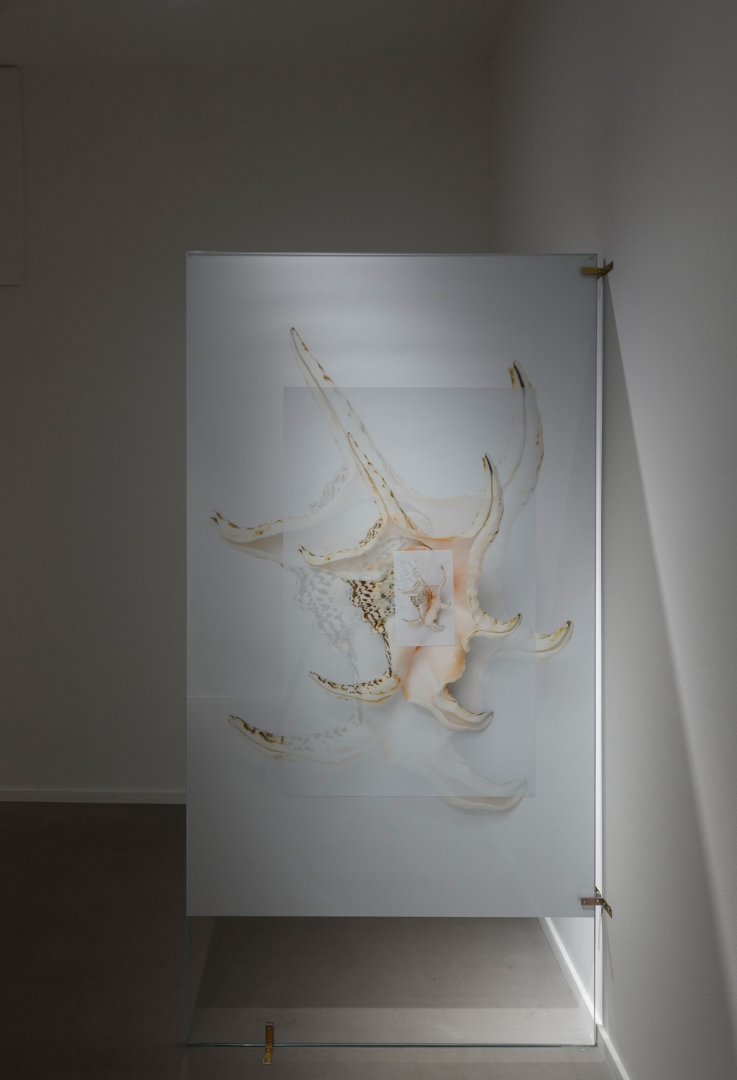 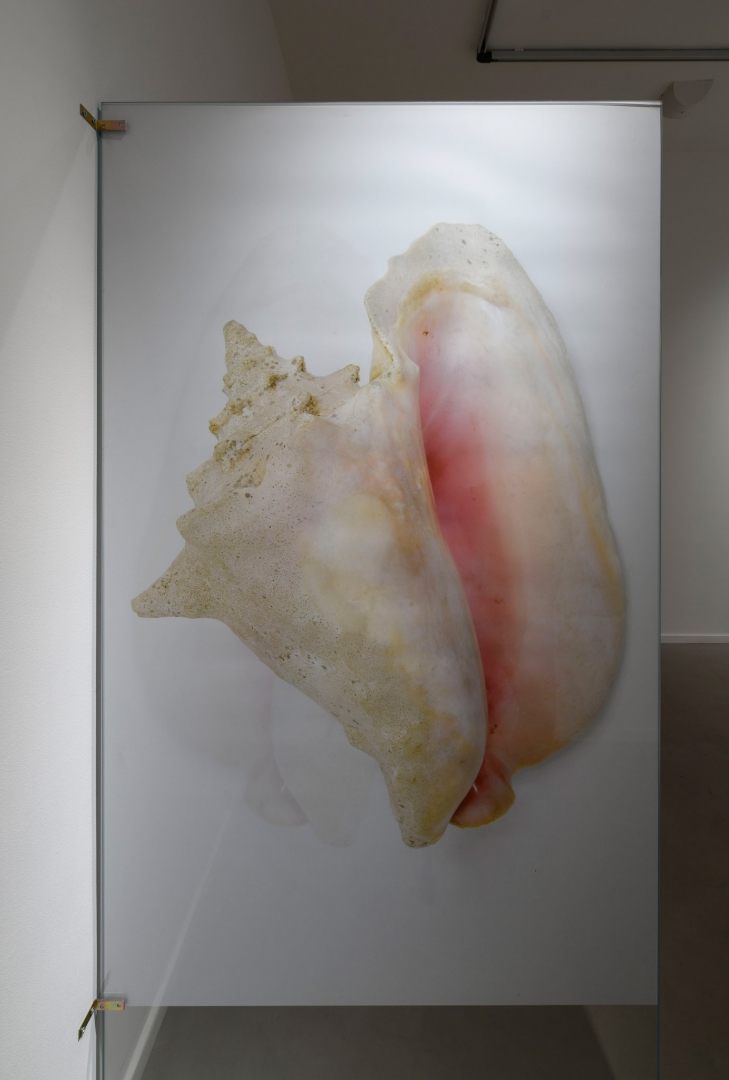 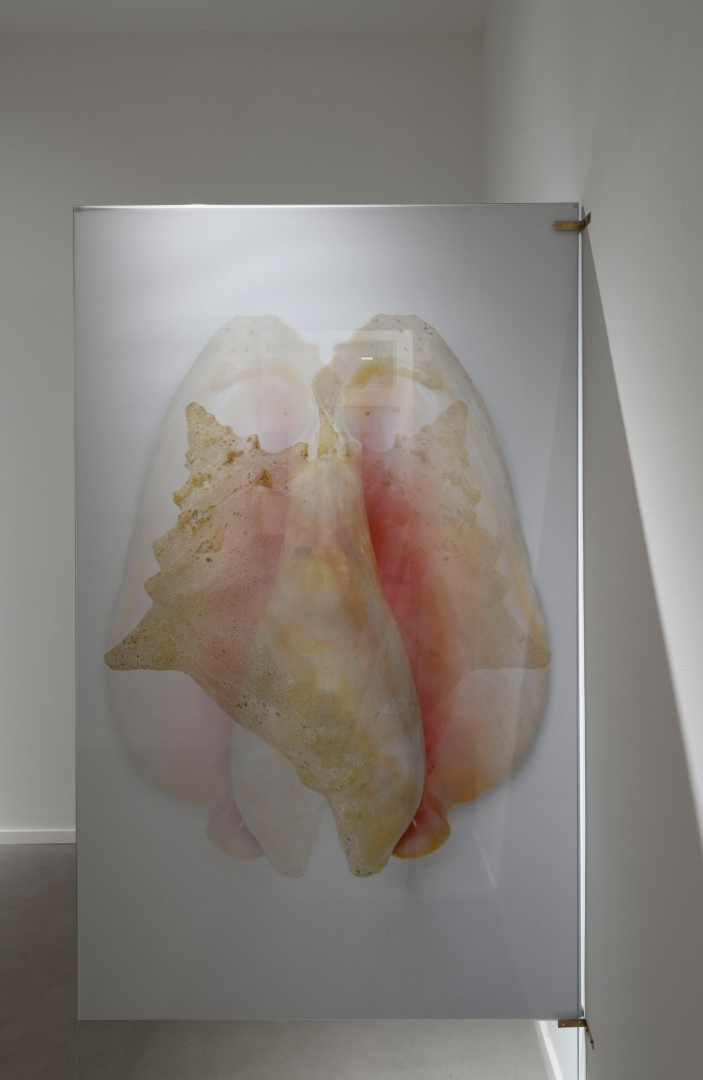 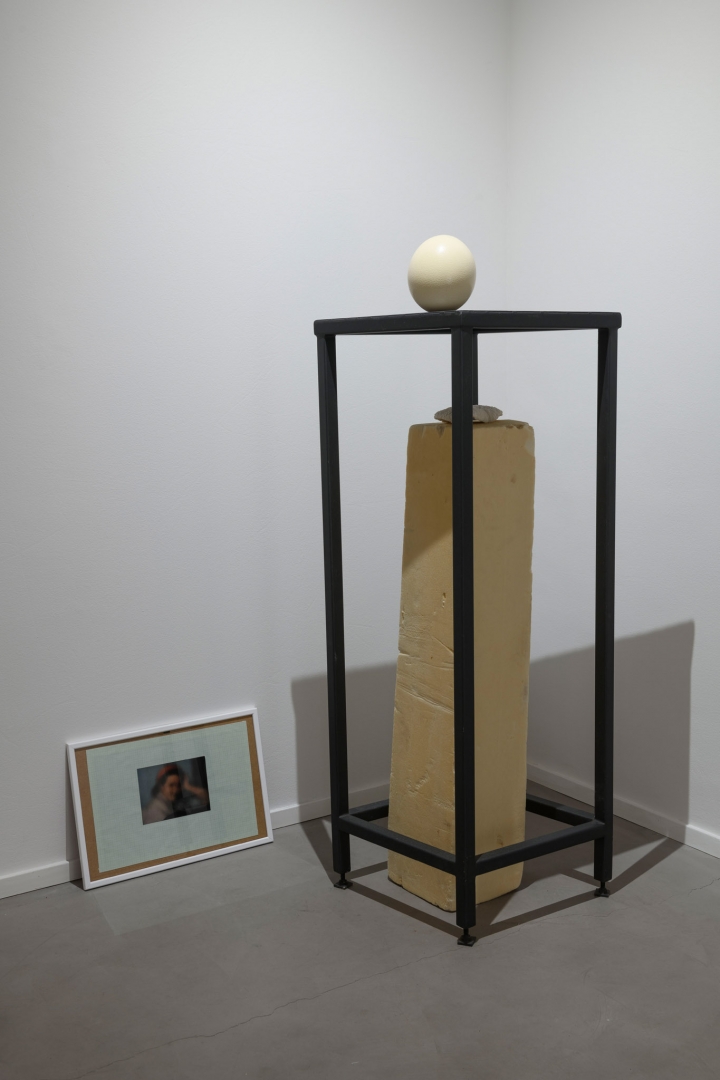 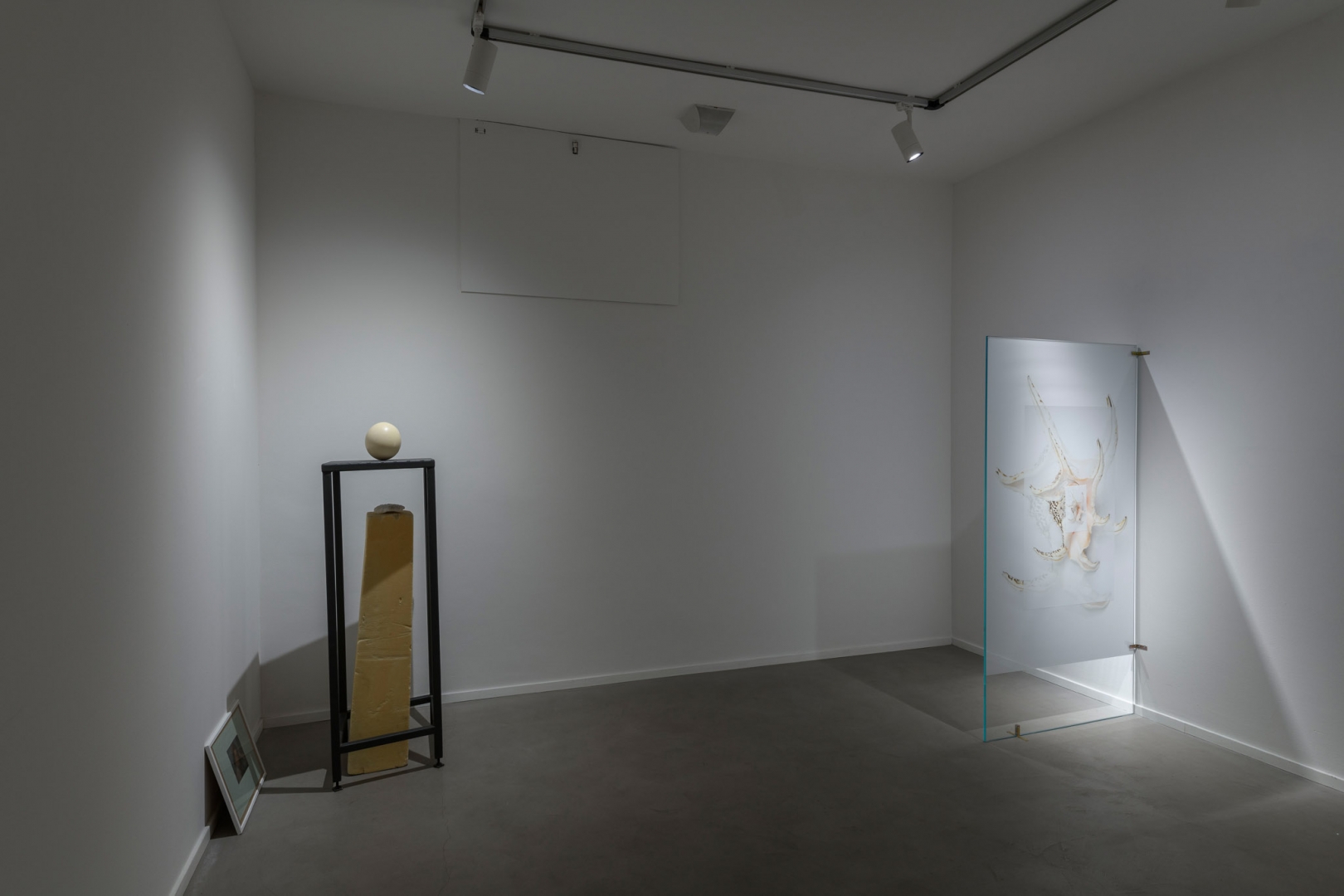 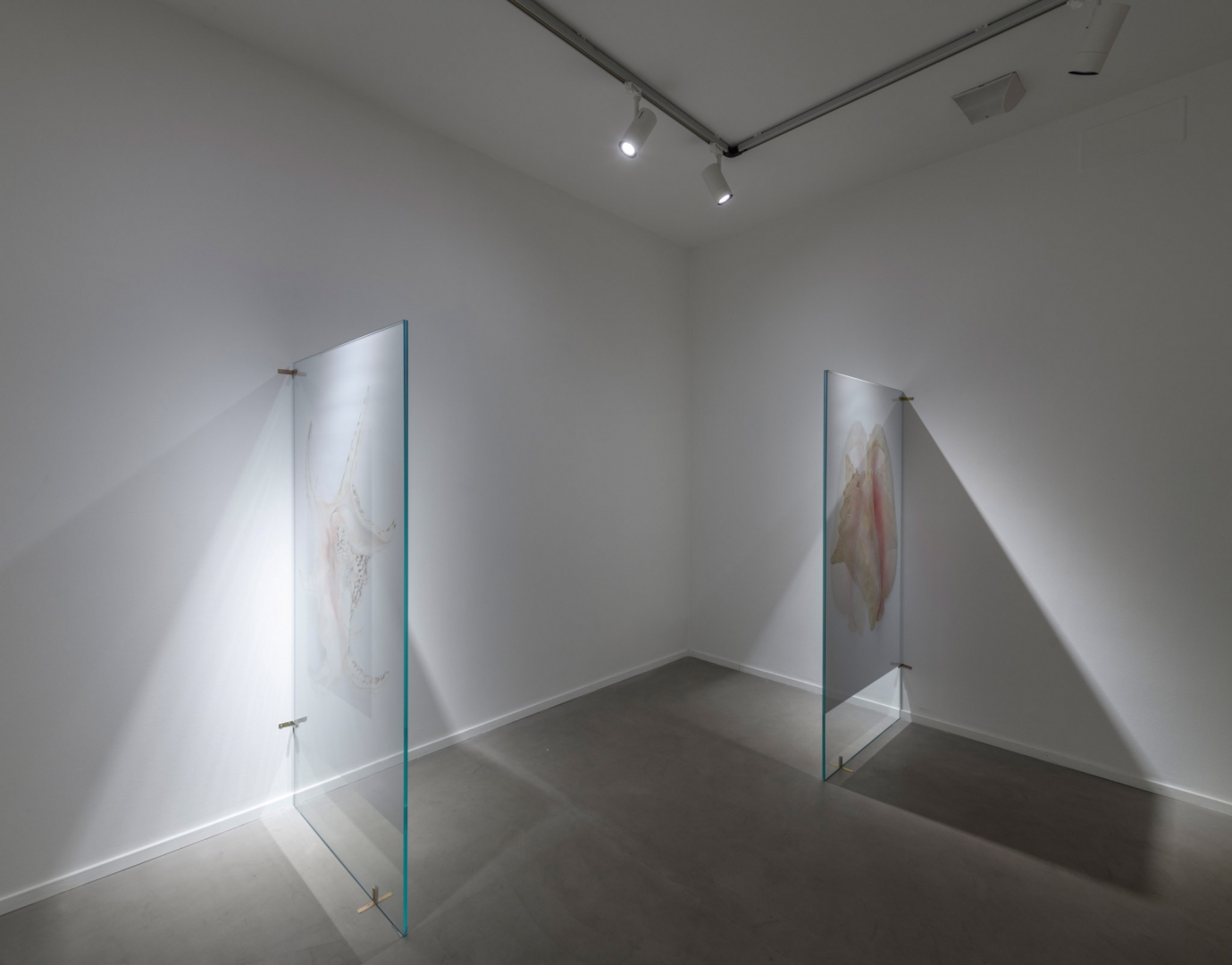 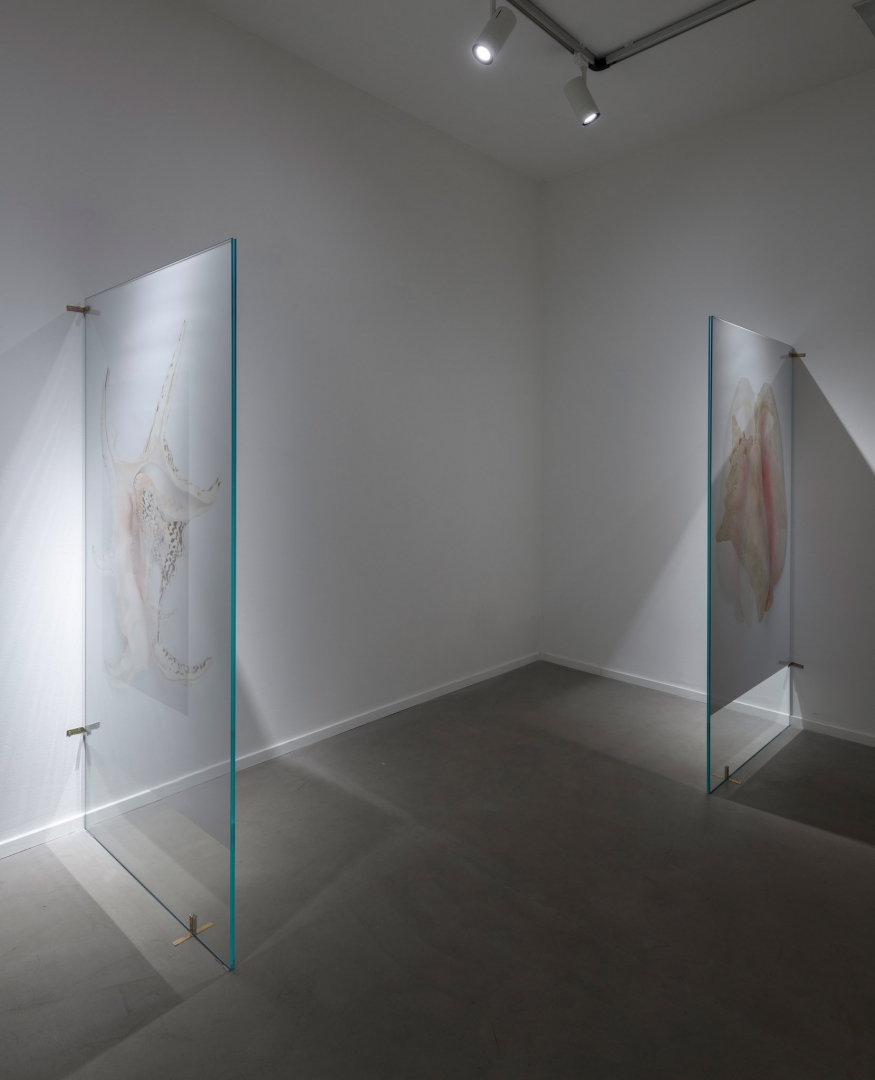 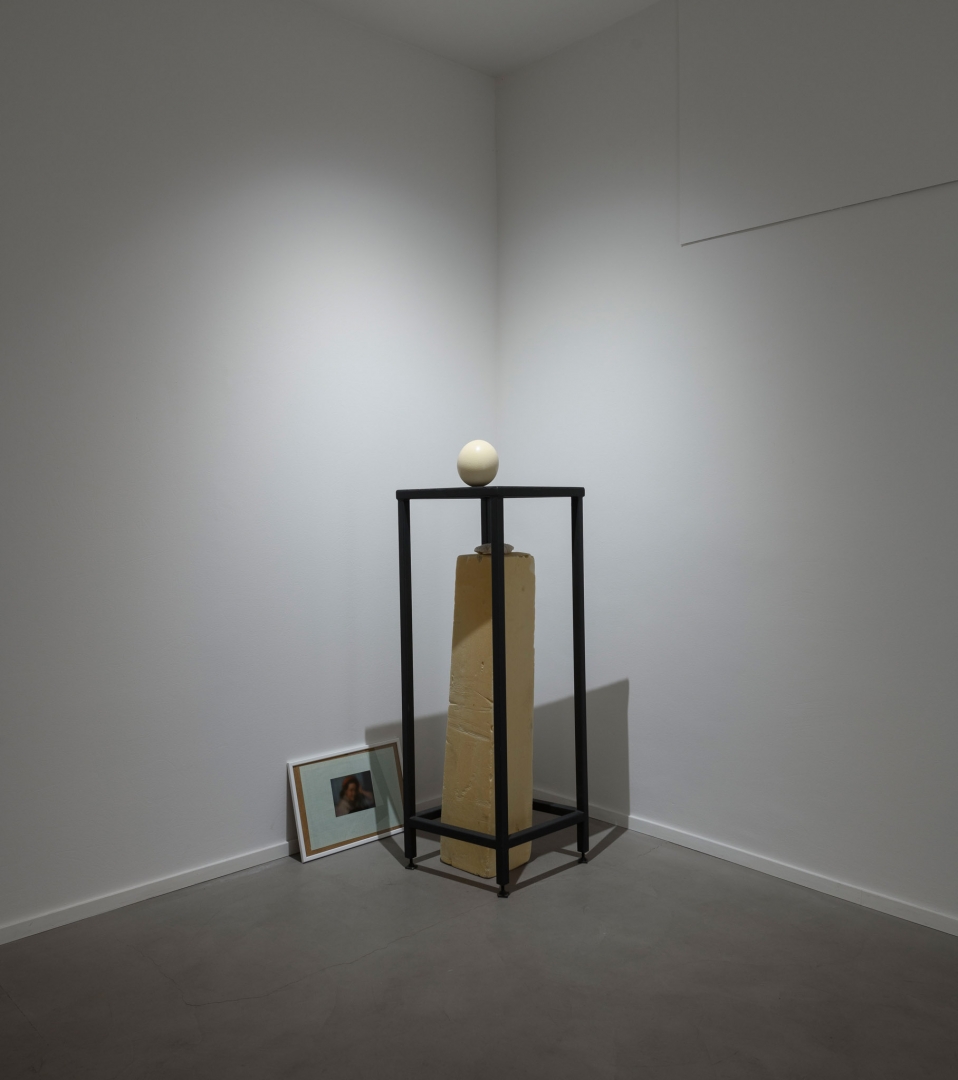 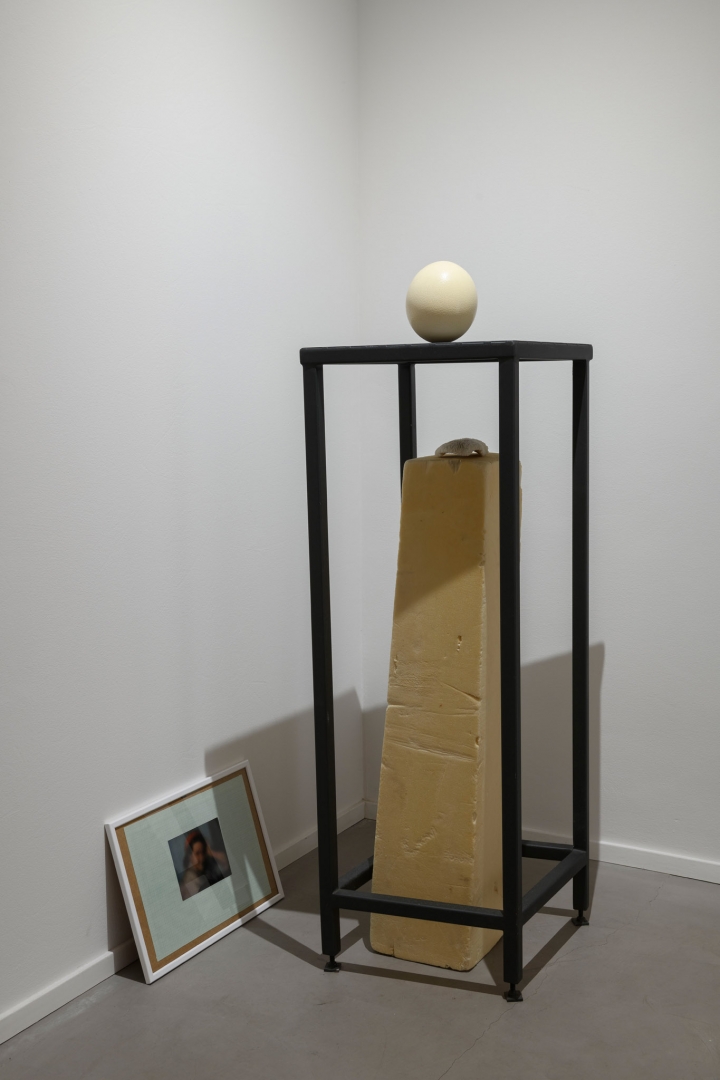 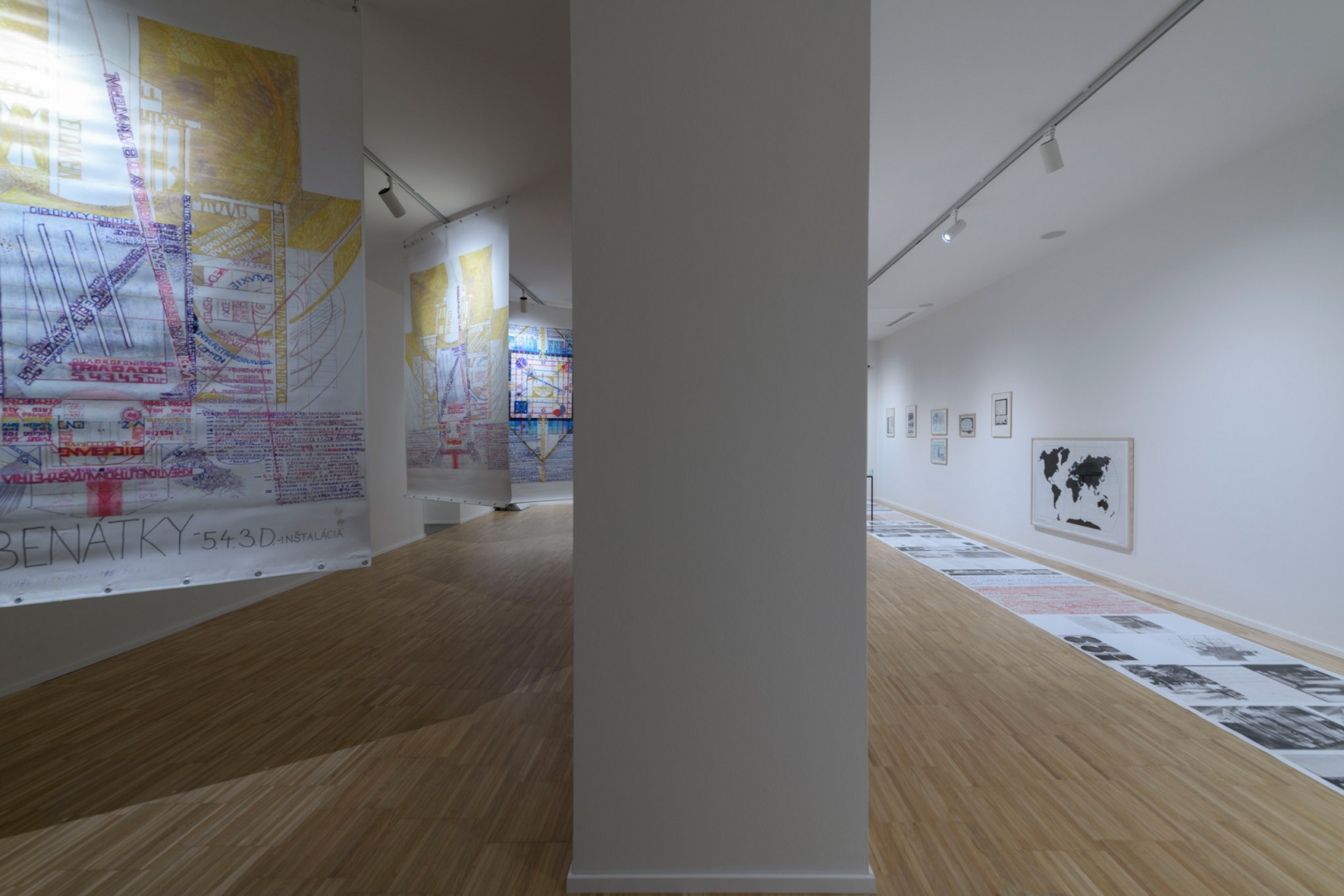 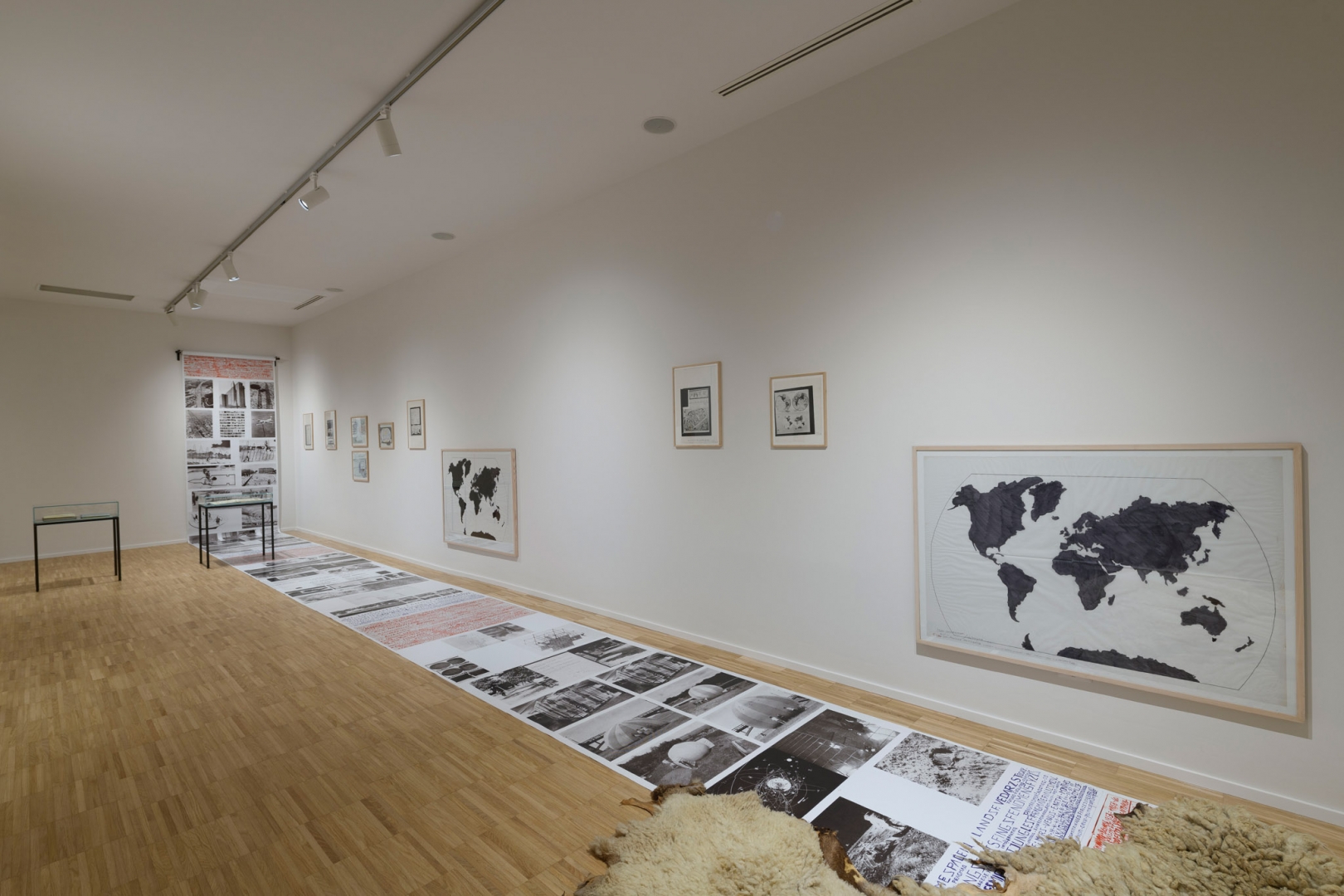 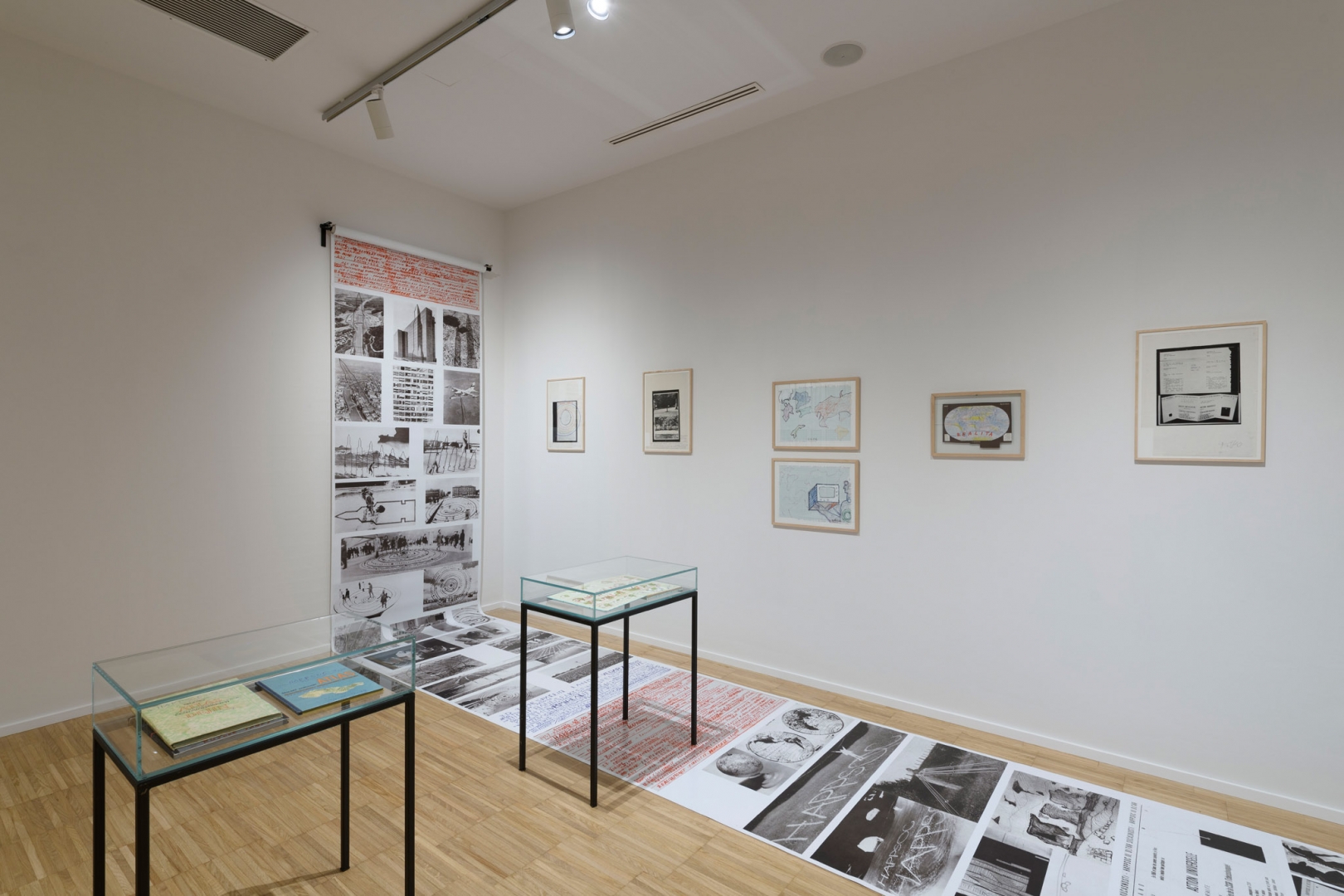 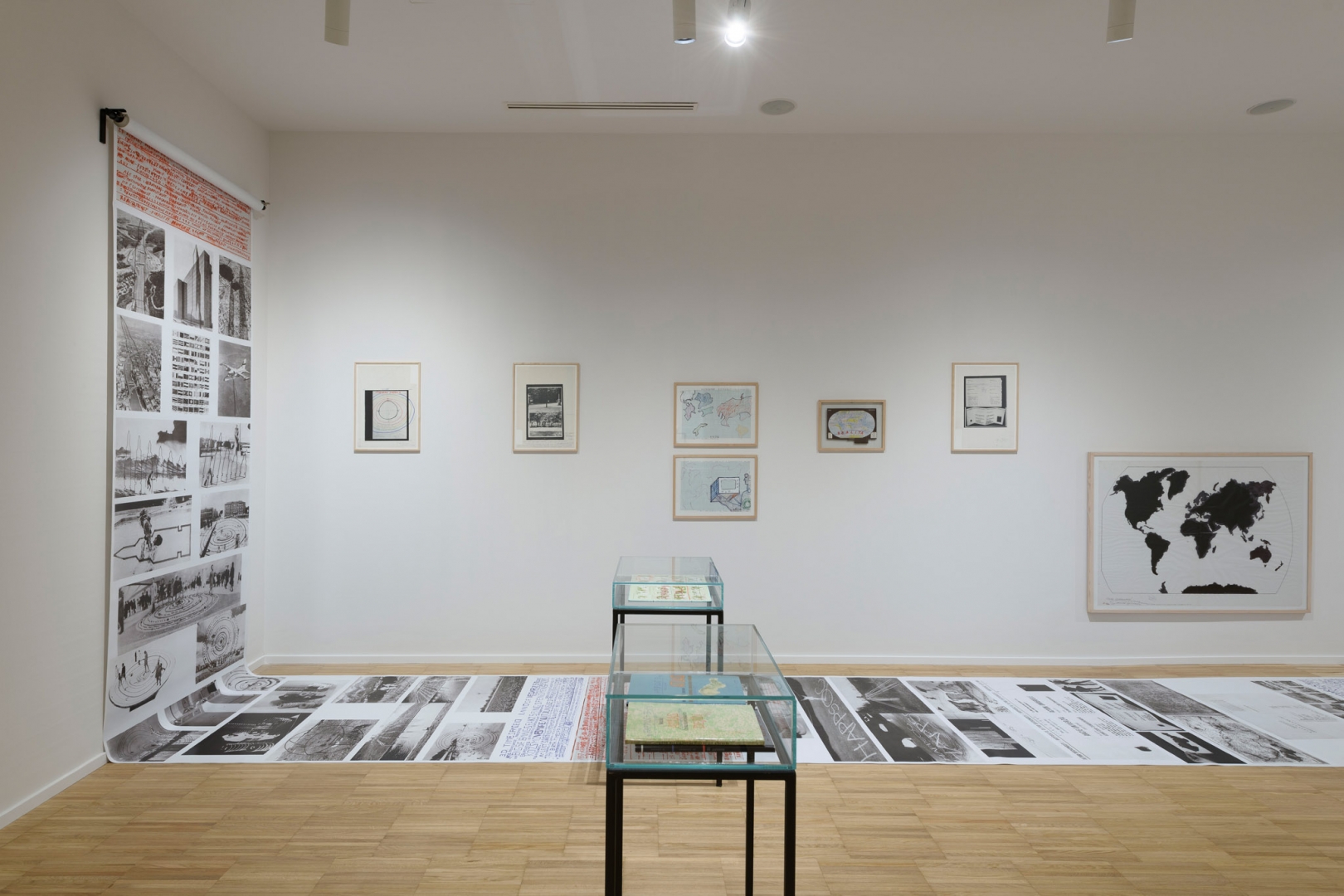 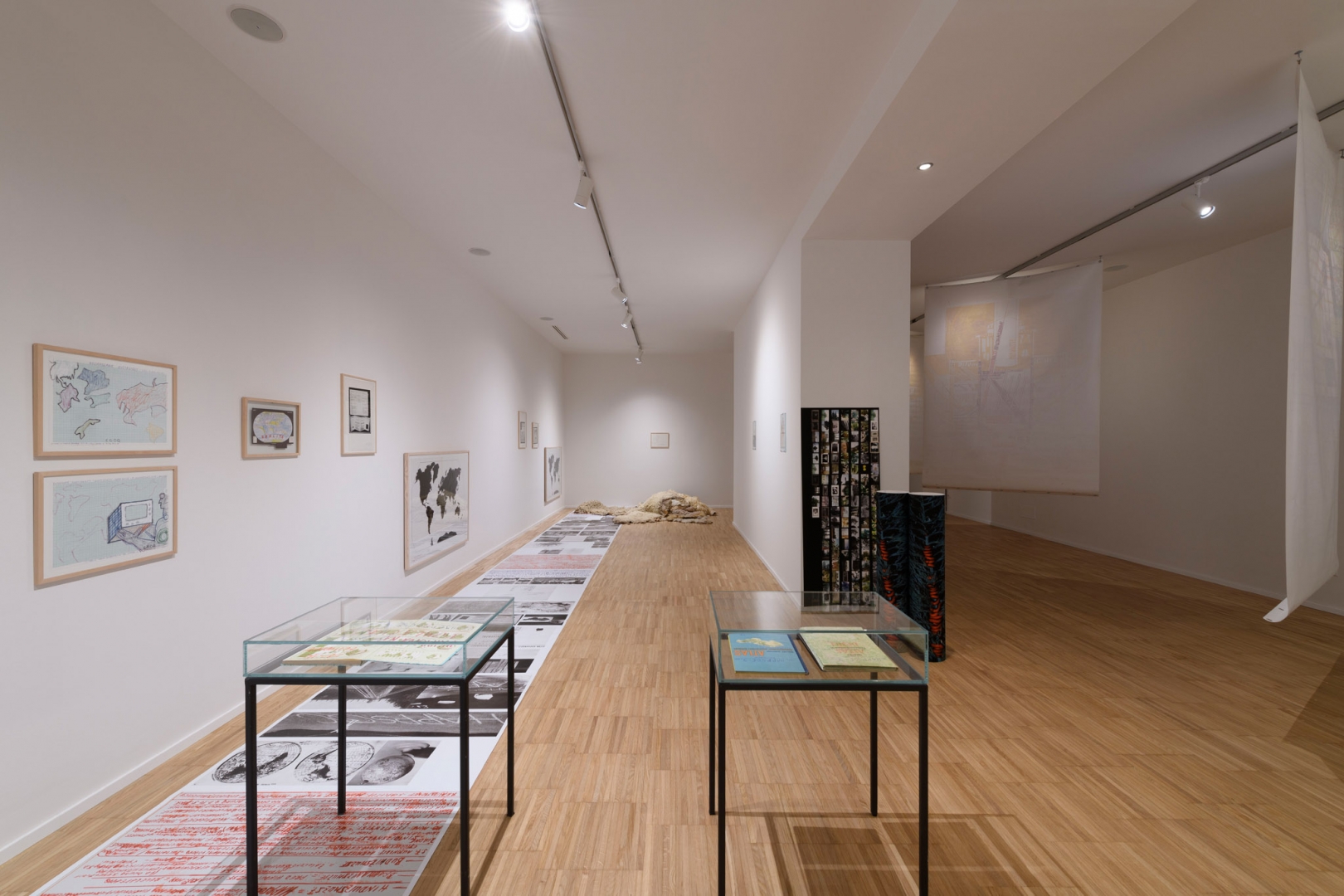 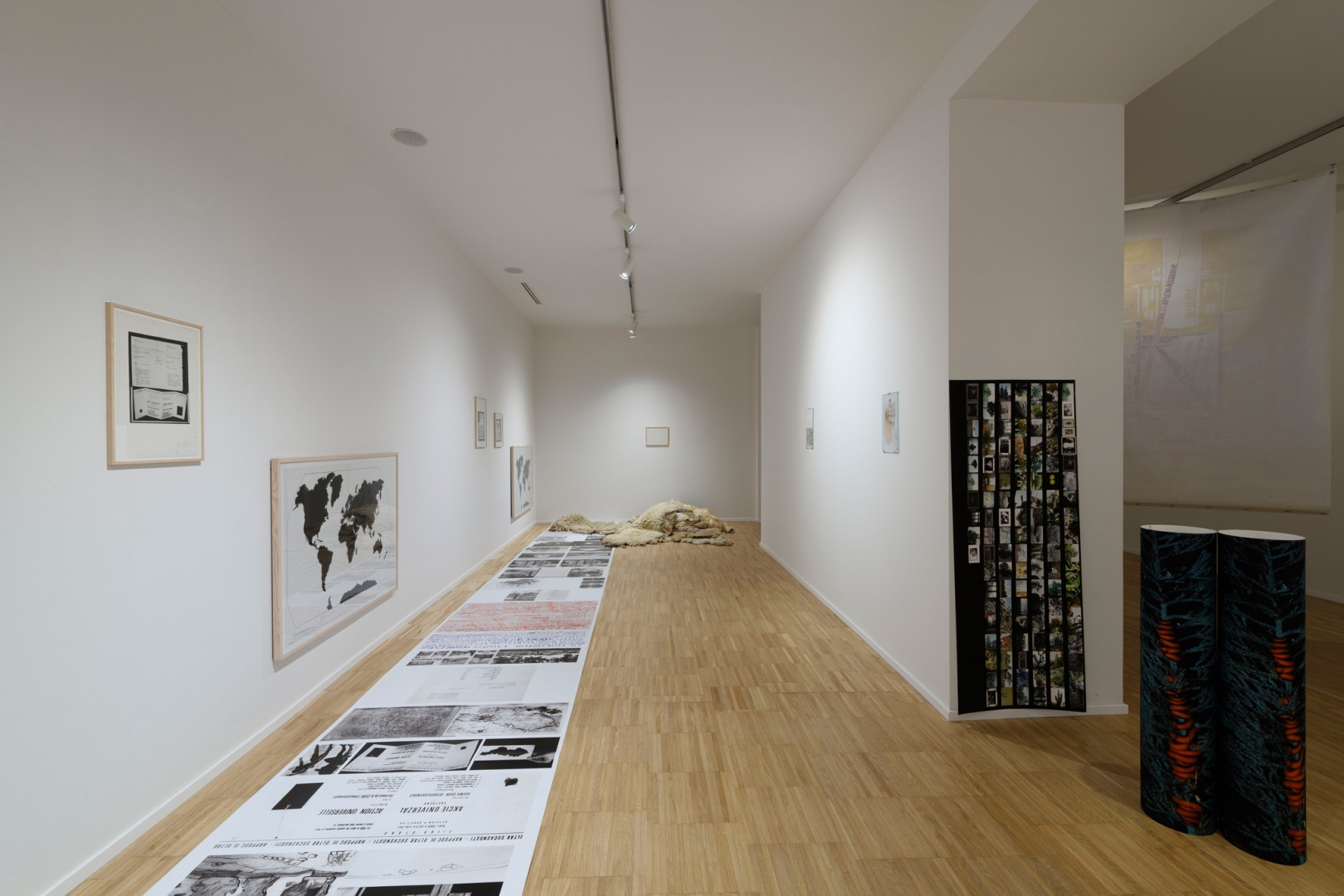 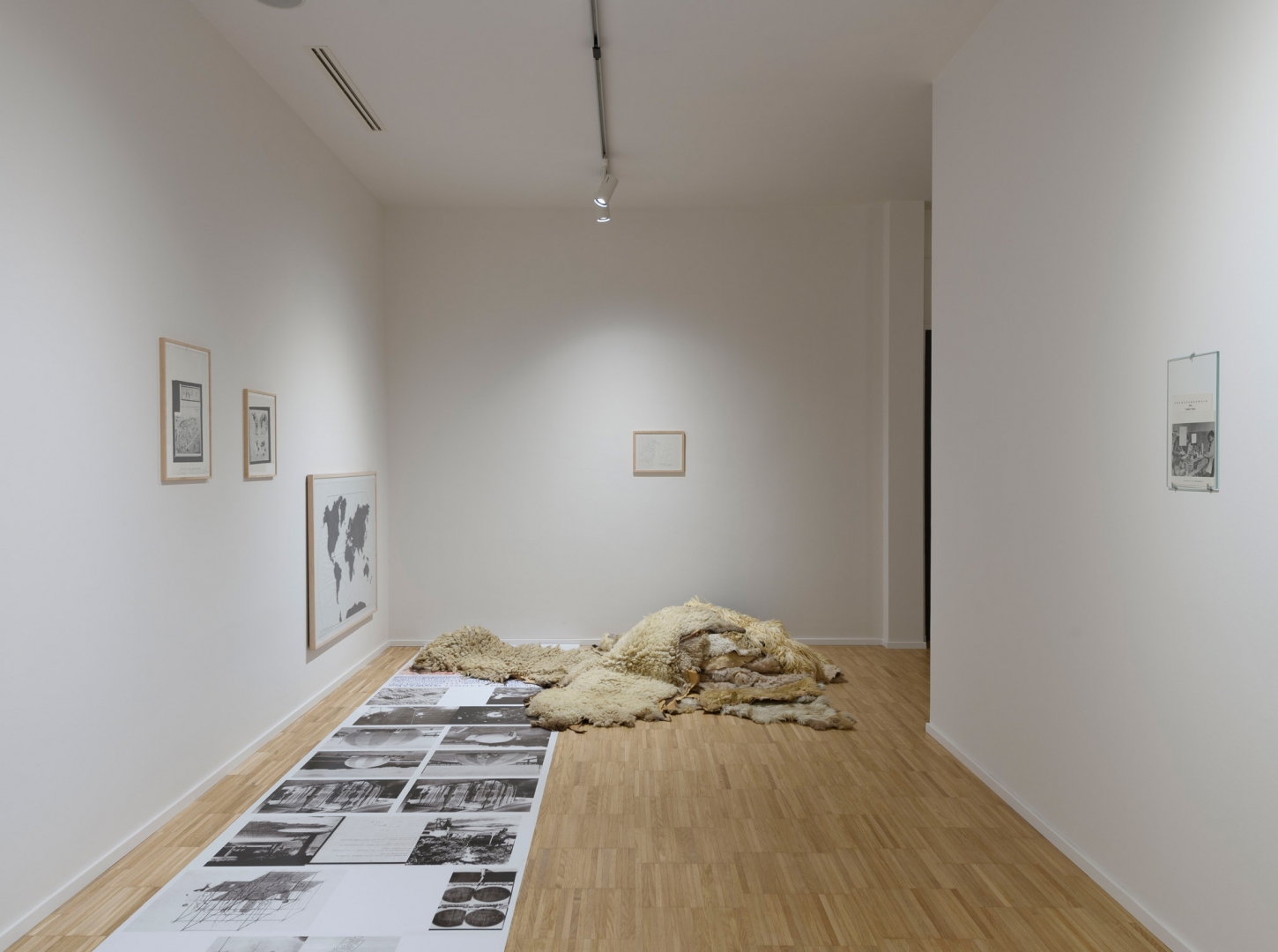 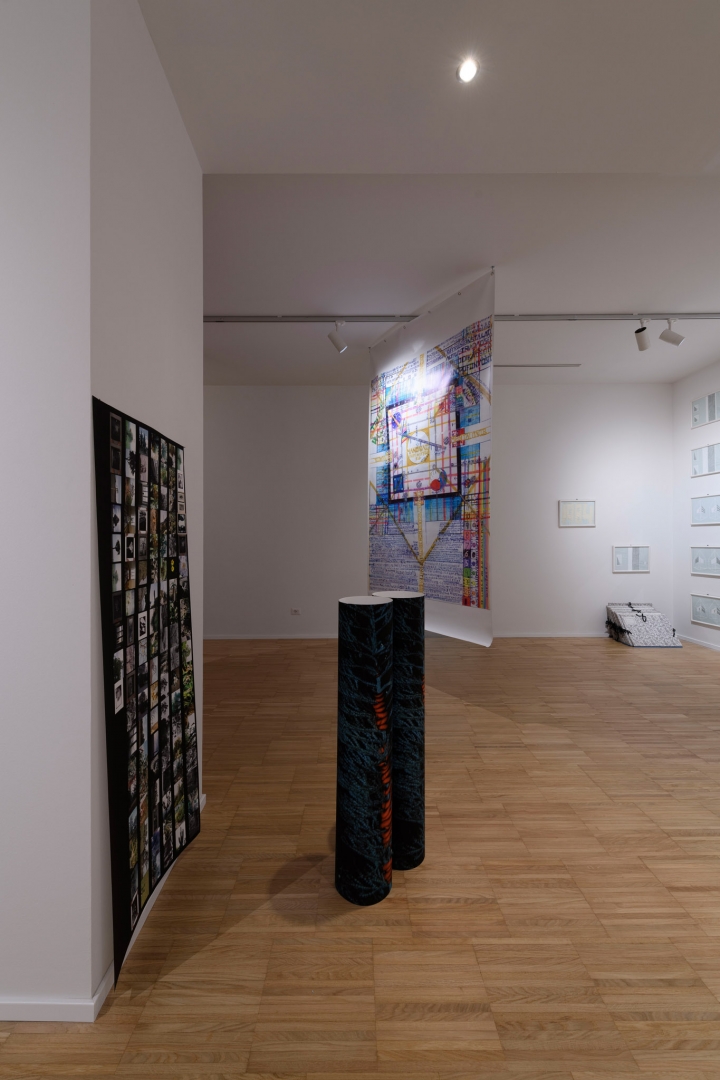 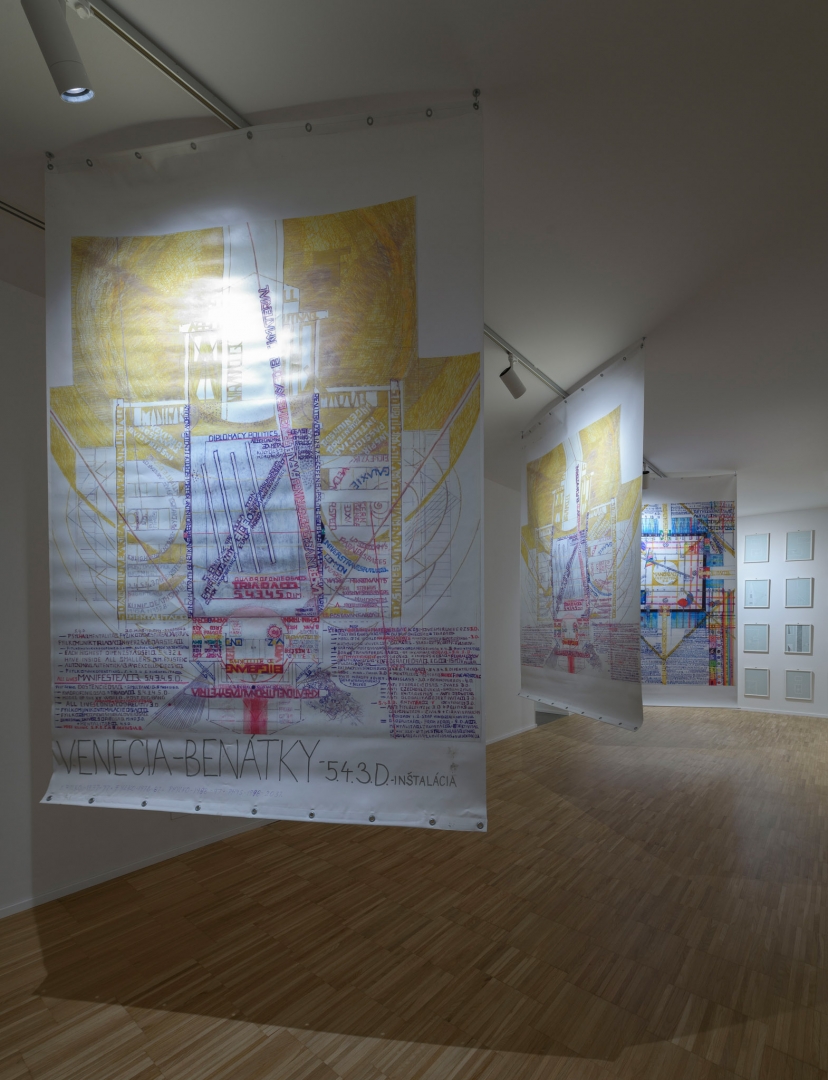 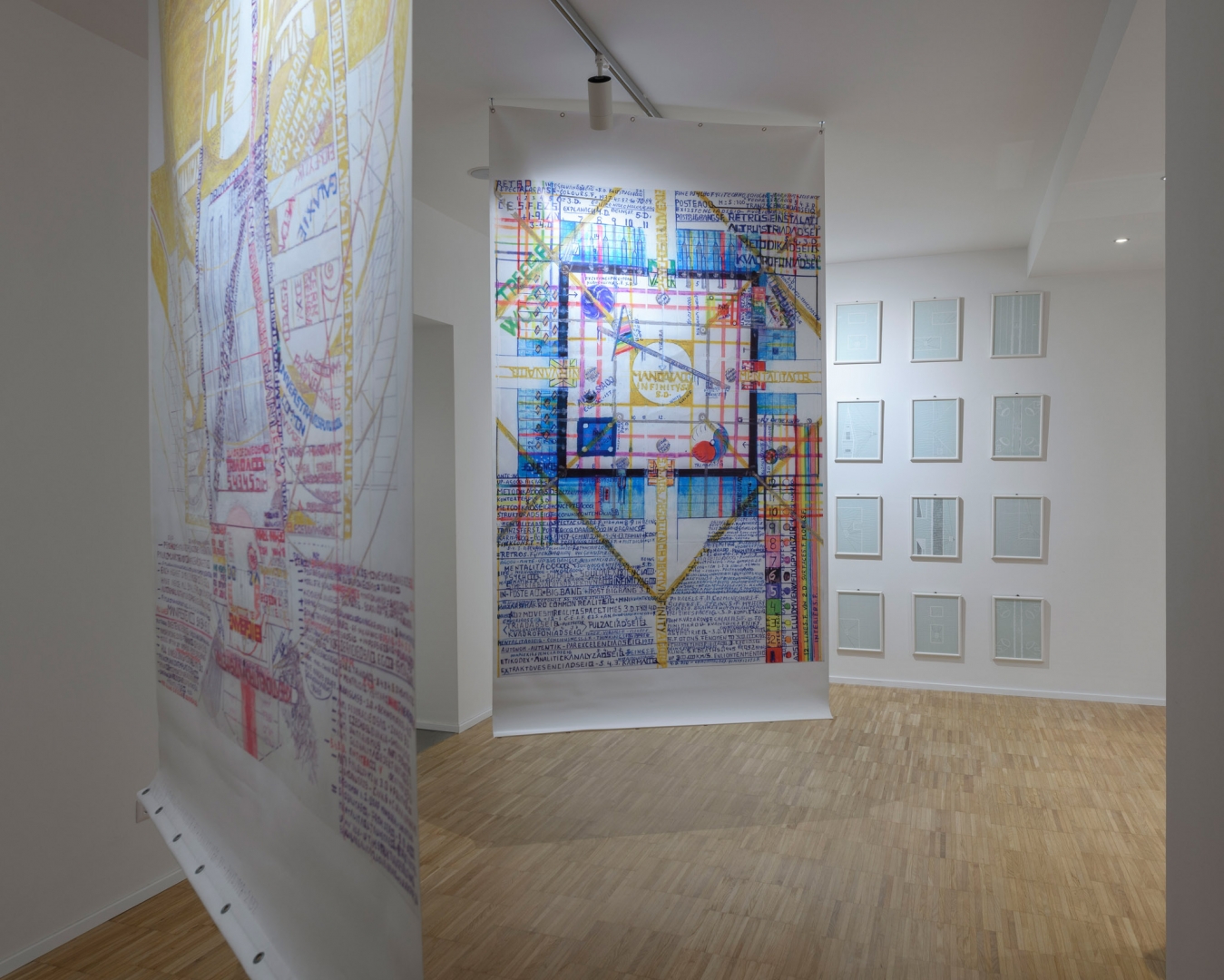 Pythagoras was the first to identify the diverse content of the world using the word “cosmos”. Cosmos is, apart from the definition of the origin of the world, also a term for individual organization, orderliness. It is an antagonist demarcation of oneself from a parallel phenomenon accompanying the creation of the world, that which is chaos.(2014)

Someone once told me that the work, or rather, the parallel universe of Stano Filko will disappear alongside him upon his death. And they were right. However big and corporeal Filko’s world was, all that is left is fragments. Fragments similar to those of ancient civilizations, destroyed in catastrophes. I don’t want to write about Stano’s catastrophes, even though there were many. In contrast, there is little of his life’s work left, despite the amount he created. Filko went against himself, his limits and physical abilities, time and space. But also, he went against  the creator.

I try to set the the works, which Stano gifted me, as well as the ones I bought after his death from his son, into a frame of reference, or a fundus. The goal of my study is showing the work to the spectator. I approach my work in the same manner. However, that often must wait for me to be able to perceive it at a distance, or, at least from the perspective of a spectator. Hence, the turn of the appropriated image here is more affective as I am not trying to distance myself, as I do with my own work.

Ideas usually come in abundance, and I believe the first ones to be the best but considering that it is not a site- but a situation-specific work, I have forgone the raw walls and gypsum profiles I had in mind for a substantial period. Initial reactions tend to be mimetic as I try to understand and become one with my subject. This response to Filko would be epic and unecological. Time and space are at stake once again. Under pressure to find more of Filko’s works I excavate my own work, semi-refined relicts sans closure. Through the lack of closure, the continuous themes of anthropocentric systematization of nature, and understanding nature as a human invention, I have figured out, somewhere in my subconscious in a somewhat utilitarian manner, that the logic and associations work.

Rather than an impacting architectural approach to Filko’s exhibited work, my design is referential. Stano Filko is an architect himself, his works are structural and capable of structuring themselves. Even though they are now fragmental, they still possess the potential to be an architrave system, just as the ruins in a roman forum. *(I have already written about Filko’s work, which can be reorganized and restacked despite its incompleteness or absenting particles, with identically powerful impact.) Filko’s works encroach the space and hence, my intervention is not the fundament, but rather a sort of glossa. At times they are intrusive, on other occasions totally invisible.

I have chosen older works for aforementioned reasons, but because my newly unearthed works have been created at a time when I was meeting Stano and listening to him, in the period from 2012 until his death in 2015. I had my own research oriented on zoology and botany and although I admired Stano’s paintings, I did not share his point of view. In 2020 I was invited to participate in Hydrozoa, reacting to Filko’s permanent exhibition. ** Somewhat instinctively I approached the project through gender archetypes, creating a rhombic aquarium with mirrored walls, inhabited by apteronotus albifrons, fish whose bodies move and swim in all directions, without a beginning or end of both the body and the movement itself.

Filko’s drawings on graph paper are a unique series, as uncharacteristically for Filko, they are not a multiplication, but a variation of an infinity of similar motifs. Rather than an edition, where each handmade piece is an original, it is a sort of manual copy, typical for Filko. My father’s seashell collection (as shown at Biennale 2013), where each shell is indisputably singular in its individuality, is positioned as an analogy to Filko’s series of 27 author-framed drawings. In this case, it reflects a post-Darwinist model of evolution, natural and unnatural selection, or rather, genetical breeding – anthropocreationism.

Filko’s system of copies upon copies is evident in his Banners. It is a work about space, a palimpsest of layers and other interventions. I remember Filko using exhibition documentation, further copying photographs, layering them. Then he asked me to hold them while he took the drill and drilled through them, the carpet, and the hardwood floor. The holes are a vacuum. It was as if he was focused on the disappearing image, which he was resuscitating by further physical intervention. The banners are rolled up; unrolled and installed they become educational, discursive, never-ending fireworks.

White is an emotion; White is an ontological space and beginning of everything. Filko worked on the notion of White extensively, resulting in White becoming the colour of transcendence, just as phenomena come to be – by simply happening. In early 70s he created the manifest White space in white space alongside Miloš Laky and Ján Zavarský, where white became ‘pure emotion.’ Stano positioned the catalogues into his mausoleum – his pyramid in the garden of his studio at Koliba. I remember driving to Hradná while preparing his last exhibition in March 2012. On our way back a lorry passed us and Stano said: ‘I want a car like this to transport my works!’ ‘A car this big?’ –‘No! This white!’

*It is interesting, that this world – a colossus – has an absolutely perfect inner order; it is functional, but also combinatory, also despite many manipulations, moving or even destruction of the works (also by Filko himself). It is possible to rearrange Filko’s work, constantly; and if one starts, it is impossible to stop, one simply has to, wants to orientate oneself in his work – understand it. Even fragments, which were taken out of Filko’s context by force; or even as a part of individual objects or installations, work on their own. They dispose of a large creativeness, which is something I miss as an artist without a studio. Filko’s work left Koliba, it was assembled in Veľká Hradná, there it was taken apart to mere parts, sold and then exhibited again. Even after such a terrible destruction of this world, one can still preceive it and its size is indisputable.

At the same time Filko’s world, or rather his work, is very biographical, almost hypochondrically obsessive. Apart from notoriously known clinical deaths, there are new references about his lifestyle. Filko counts the days passing by. He creates objects out of empty butter milk cartons and mineral water bottles. Perhaps it is an apriori artistic conversion of everything that he comes across, or the bottles have a symbolic meaning. Filko’s mineral water bottles from his last days are punctured with metal rods with ape stuck to them. The bottles were donated during the opening of the exhibition and so people could leave with an object, which was a part of Filko’s basic human need. Filko as if ritualizes his day-to-day, which is at the same time known to us all.

Filko constantly recreates and creates new constelations from his own installations and environments. He paints over, rearranges, and dates back, or does not date at all. He always states the older dates, even though the works were post-produced – Filko’s dates almost never correspond to the reality. Filko alone constantly changes them. For Filko time is a subjective matter. Filko creates it. Filko does the opposite of dating back. (2014)

**The Central Slovak Gallery in Banská Bystrica owns an extensive collection of works of an archival and nature of the neo-avant-garde artist of the 1960s generation Stano Filko. The format of permanent exhibition from this collection HYDROZOA is not conceived traditionally – as a closed and finished exposure, but is of a variable nature according to the changing gallery program. In Central Slovak Gallery, it is implemented by invited authors, who critically reconsider Filko’s radical concepts and update his legacy for the present in autonomous art projects. The program, the aim of which is not commodification, but the dissemination of knowledge about Filko’s monumental work, was made available to the public by the introductory part in 2017.   The fifth part of the HYDROZOA project, curated by Mira Keratová, in the author’s concept of the artist Petra Feriancová is a vast sculptural object – specifically designed six hundred liter ionic aquarium. Rhombic form is one of the iconic and revolt moments of Filko’s iconography. Filko has been using it as a diagram representation of the biological nature of the physical world – not only in a popular, accessible way, but also subversively sexistically. In his colorful psychophilosophical system, he expressed the world by magmatic orange and red colour. Feriancová conceptualized this popular schematization of the mother’s bowels in the classical poetic-epic Aristotelian tradition; and in search of Lacan’s unspeakable, unrepresentable of the Real authentic reality, she shifted it to the prospective posthuman perspective of the era after nature, where nature no longer exists outside of humankind.   Abstracted rhombic shape of the glass aquarium with water and a mirror “anatomical” partition in the middle animates the choreography of water beings located here as the so-called live readymade (see animal art). In the art gallery observable and adapted environment of tropical fish of the genus Apteronotus Albifrons (black ghost knifefish) is being created here, defined by the image itself. Under unregulated natural circumstances, these are nocturnal, rather difficult to observe animals which search for densely overgrown streams of the Amazon basin full of hiding-places in their habitats. Fish called Black ghosts are also famous for their physical qualities, which include surprising rolling on the sides or ethereal drawing while moving the pleated fin along the length of the lower body; other anatomical peculiarities include their orientation in space or e.g. when fishing for invertebrates and small fish using echo (in a weak electric field they transmit 3-10 V discharges and sense them through reflected pulses).